Andrew Will Winery’s estate vineyard, Two Blondes, is located in Zillah Washington, just outside of Yakima. The vineyard is named for Chris Camarda’s late wife, Annie, who was a 6’2” blonde, and their partner in the vineyard, Bill Fleckenstein’s wife, Melody, who is also blonde.

The 30 acre vineyard was planted in 2000 and is located in the Yakima Valley AVA. It is planted with Cabernet Sauvignon, Merlot, Cabernet Franc, and Malbec. The vineyard manager is Chris Hoon.

The soils are a complex mix of Harwood - Burke - Wiehl series. They are silty loams formed in a silty loess eolian mantle over a lime-silica-cemented durpan. The vines are trained on bi-lateral cordons and the rows are mostly spaced at 5X8 and run due north and south. The angle block is planted differently, however, 6X3 spacing and 32 degrees NE by SW. Each vine supports 8 positions with approximately 16-18 clusters per vine.

"I believe that an individual piece of property can form a signature – an identity – and it is that face that is the focus of my winemaking.  We are trying to let the vineyards reveal themselves.  I believe that if Washington is ever to be considered a great wine region we need to establish the characteristics of our geographical areas and the characteristics of each vineyard in those areas”

Chris Camarda is the winemaker and owner of Andrew Will Cellars. Since his first vintage in 1989, the driving force behind Andrew Will has been the primacy of the vineyard over variety. "I believe that an individual piece of property can form a signature—an identity—and it is that face that is the focus of my winemaking."

Named as one of the 50 most influential winemakers in the world, he has been in the vanguard in Washington State for single vineyard blends.

It was a natural progression for Chris to plant his own vineyard in 2000 after a decade of purchasing fruit from top vineyards in Washington State. He not only has control of the varietals planted which are the Bordeaux varietals but also the clones. Clonal variety is particularly important to him as a winemaker.

He selected the 30 acre site because of the excellent grape soil and climate. Two Blondes is not threatened by freezes as well as being just cool enough to insure a modulated ripening process even in warm years. The site has none of the draw backs he sees in some areas of the state alternating between devastating freezes and heat in excess of 100 degrees.

Patrick with his brother Matthew owns Two Mountain Winery, manages the vineyard.  They come from long-time Yakima Valley farmers and in addition to managing their own vineyards and orchards, manage several other notable vineyards in the region.  Patrick’s openness to trying new techniques, his can-do attitude and enthusiasm for the site’s potential, and his inherent work ethic make him a fitting partner.

As a longtime friend of Chris & Annie Camarda, Bill Fleckenstein used to barrel sample all the Andrew Will wines a few times a year starting in 1993. Thus, he had a pretty good idea of the nuances of the various wine varietals from the vineyards Chris was using such as Ciel du Cheval, Champoux, Seven Hills, Pepper Bridge and Klipsun. In 1998, Chris made a Sheridan Vineyard wine for vineyard owner Scott Greer.

“Chris and I were both amazed at how amazing the fruit tasted so we purchased the site next door in 2000.”

Given the specific soil conditions and micro climate, the vineyard partners have had to make several clones changes along the way. Now the vineyard is really "dialed in", says Bill “and producing stunning fruit.” He is especially fond of the Merlot and feels it is the best in the state.

As with all of Chris's wines, Two Blondes (named for their wives) will really show its best with plenty of age. 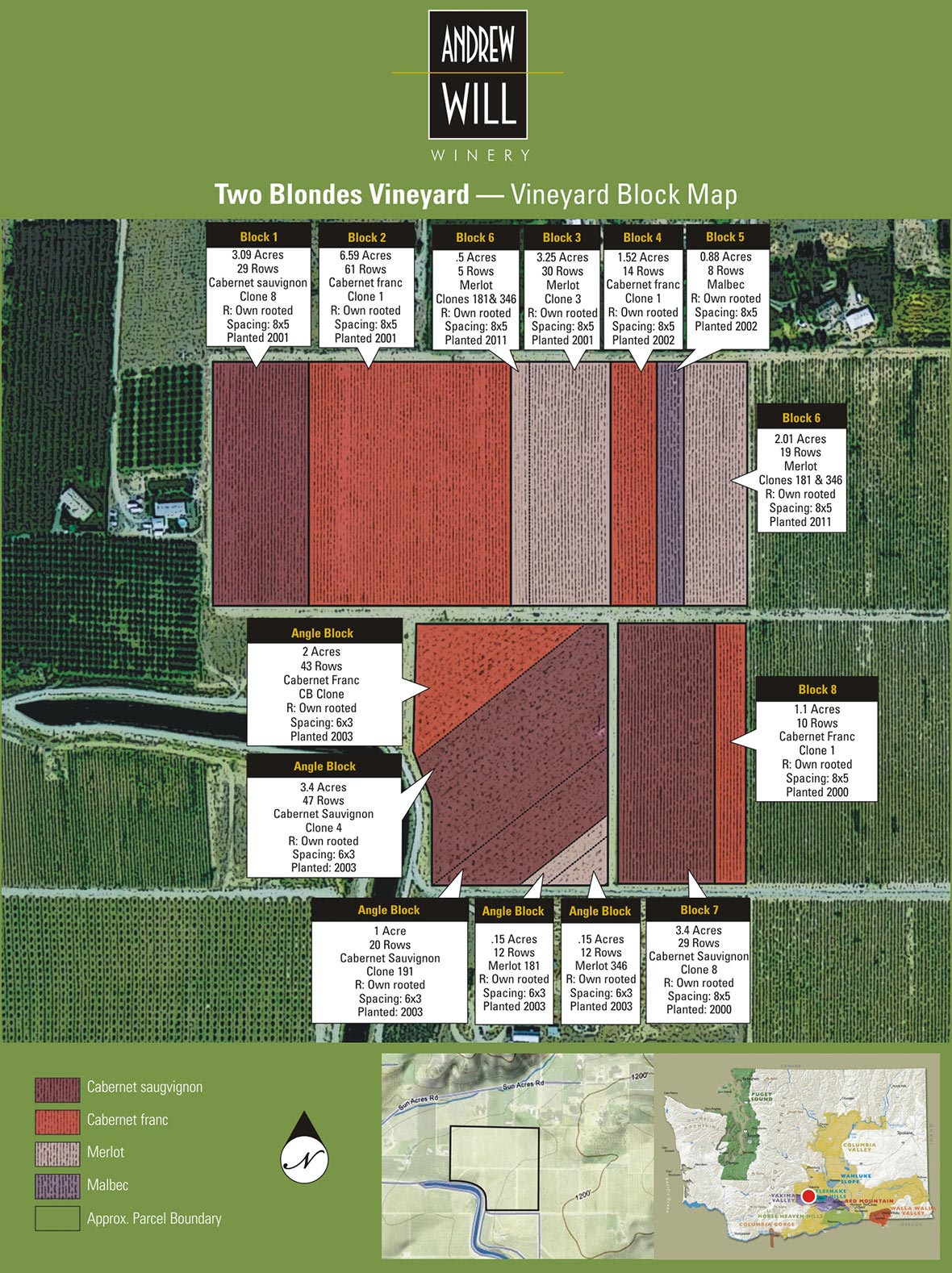 The Camardas and Fleckensteins had been friends for years. The love of fine wine, fine food and travel was something they all enjoyed together - often with their kids. When the opportunity came for Chris to become a "farmer", to own and grow his own grapes, he invited Bill and Melody to joint-venture with him and Annie.

After tossing around many, many names for the vineyard, Bill came  up with "Two Blondes" to honor their wives. After trying to trademark French and Italian versions, he decided to stick with the all American name! The parent company is appropriately named CAMB which stands for Chris, Annie, Melody and Bill. Talk about originality...

Annie Camarda, a 6’2” blonde, was very involved with Chris in establishing Andrew Will Winery and later the purchase of Two Blondes. The mother of Lucia and Will Camarda, she died of breast cancer in 2005.

Bill is in finance and met his wife Melody ( a 5'5" blonde) when they were both working for the same Wall Street firm - Melody in NYC and Bill in Seattle. Melody keeps her brain sharp by handling the CAMB books. 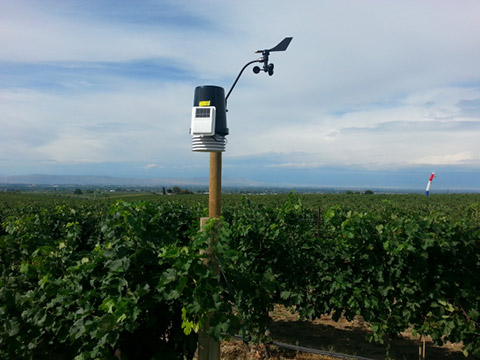 There are two Hobo weather stations at the Two Blondes Vineyard; an upper station in Block 8 and a second in the lower part of Block 5. The instruments are automated temperature data loggers which provide information to graph the temperature climate of the growing season. In addition to documenting temperatures from April to October, these temperatures are compared to long-term averages in Oakville, CA as well as to other years at Two Blondes.

Oakville was chosen as a representative climate for Bordeaux varieties in California. There is a distinct difference in heat summations between Two Blondes Vineyard and Oakville. Past seasons show consistently higher heat summations at Two Blondes than at Oakville. Yet our heat fades quickly in the fall.

Average minimum and maximum temperatures, hours above 90, 95 and 100 degrees, and below 32 are all factors that not only determine the quality of a certain vintage but give us a climatic picture of this vineyard.

Each year, we see that our season is short but intense. Our reports are available below. We are missing data for 2010 due to equipment malfunction.